small vase
Originally uploaded by Kam3k
While at the St Ives pottery I noticed quite a lot of pots with this style of double thickness rim, it seems to feature a lot in ancient chinese pots. I wasn't sure how to make it and couldn't find help on the subject but the other day I figured it out by accident although my method may not be the traditional one. I found that by creating a short neck then folding it over flat I get the result you see here, pretty much the same process as creating a rolled rim on a bowl except this is flattened out to remove the hollow in the middle. I've made quite a few like this now, the one in the picture is probably my favourite shaped pot I've made.
Posted by David North at 4:44 AM 2 comments:

big mug
Originally uploaded by Kam3k
I think i've made a good bit of progress with my handles on this latest set of 5 mugs (It would have been 10 mugs If i hadn't stupidly gone too thin on the base on half of them.) For a while I think my handles have been letting my pots down a bit and putting me off from trying to make pitchers which really need a great handle. In particular I've been having a hard time getting the right profile which depends entierly on the shape of your grip on the glay as you pull out the handle. Thanks to a lot of very helpful instructional videos on Expert Village and YouTube, and a fair bit of practice, I think I'm starting to get the hang of it.
Posted by David North at 4:35 AM 1 comment:

white vase
Originally uploaded by Kam3k
I currently have a large backlog of bisque fired items waiting to be glazed and I hoped some of the items in my recent stoneware firing would have been sucessful so I could reproduce the glaze combinations on the rest. Unfortunately this little white vase is the only sucessful item from my last stoneware firing. I tried brushing a white glaze on rather than dipping, this one goes to a nice toasty colour where it's thin. The rest were dull at best and a few were disastarous with previously well behaved glazes running down the pot and sticking it to the kiln shelf.

My plan is to do a load of glaze tests before doing anything with the finished pots I'm accumalating. Last night I threw a lot of tiny pots off the hump which should make better glaze tests than tiles. I'm picking up some glaze ingredients from our local potters supplier next week so I can mix a bunch of different recipies.
Posted by David North at 4:27 AM No comments:

This bowl which I raku fired yesterday was a special commission from my dear wife Mel.

Its purpose is to hold a ball of yarn in place during knitting or crochet. Its a slightly closed in bowl with a wide foot and relatively heavily thrown.

While spending a week with family down in Cornwall we visited the recently restored Leach Pottery in St Ives.

The clay room, kiln room and main workshop have all been restored to how they were when the pottery was in use and contain many interesting tools and materials including Bernard Leach's own wheel. New buildings have been added to house an exhibition of Leach's work, a shop and new workshops were some lucky students will learn. There was an exhibition of Bernard Leach's work as well as work for sale by various contomporary potters including Bernard's grandson John Leach all of which was very inspirational.

Posted by David North at 9:26 AM No comments:

The name for this blog comes from a pottery technique of producing several items from one large mound of clay on the wheel. This technique appeals to me a lot for some reason although I'm not using it much yet. Its main advantage is for the repeated production of several small items since you don't need to centre a ball of clay for each item, small amounts are fiddly to centre on the wheel. More interesting is the extra freedom it gives you, you can take as much clay as you need for the item, even change your mind and take a bit more by working downwards. This video is a pretty inspiring example of the technique being used by a Spanish potter.

Posted by David North at 6:04 PM No comments:

Labels: Seen on the web, Throwing

I've been displaying some work at an exhibition of local arts and crafts at the village where I take pottery classes. I wasn't that keen to part with so many items just yet so I only offered 2 for sale which have both sold. I think I underpriced them to be honest. Here they are amongst some other much more interesting pots. 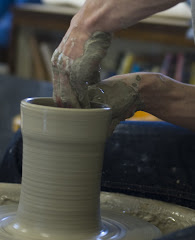 David North
I'm a web developer and aspiring potter living in Dorset England. This blog is a record of my attempt to master this craft.